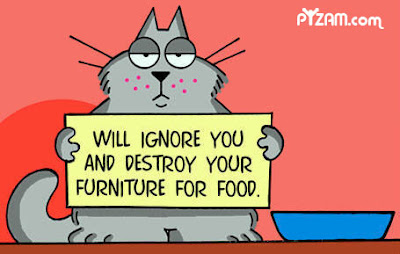 My attitude to the feline population has always been pragmatic. I blame my upbringing on a farm. There, every animal had a job specification. Cattle were bred to produce milk and meat. Dogs were burglar alarms. Cats kept rats and mice away.
Having lived in an urban area since leaving home, I've regarded cats as something to be tolerated. The approach of one in my vicinity brought on an automatic "Shoo."

Life has, however, conspired to change my attitude.

The sudden, tragic loss in recent years of a dear family member, left our home in mourning. My then eight year old son was in a state of perpetual, glumfaced gloom. Until the arrival of a stray cat at our back door, with whom he made immediate friends. Despite my reservations about her presence, their friendship flourished. She would arrive under his bedroom window each morning, miaowing feverishly until he threw on his clothes and ran down to let her in. He would kneel beside her, rubbing her luxuriant coat, while she nuzzled his face and purred like an engine, his mother buzzing around in silent dissention in the background. 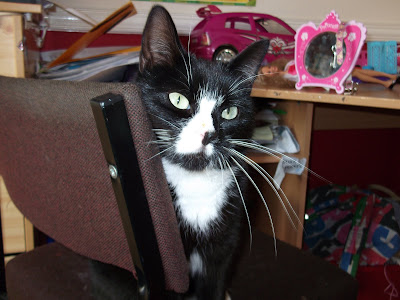 I had no option but to concede to a greater power. She had put a smile back on his little face at a very difficult time.


So, the word that now forms in my head when she approaches is "Respect" 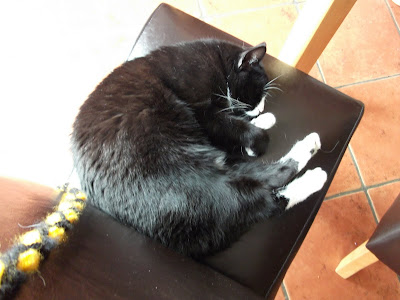 Except, of course, when she sleeps on my favourite chair, but then I can't have it every way.
Posted by Mari G at 5:41 AM

Respect is the word, Mari. I've always kept an awed distance from them but it's wonderful to hear your cat helped cheer your son. Can't say the same for Gargle, our goldfish, who hasn't been cleaned for about a year, poor stinker. Debs

i appreciate your post - cats dont have many uses, but comforting is a big one!
happy c day!

I love your site your cat sis adorable.I decided to award you the Powerful Woman Writer Award.
Go to http://astorybookworld.blogspot.com/p/awards.html and pick up your award.
~Deirdra

cats leave me cold too, and they give me the creeps. I suggest they learn to wag their tails.

Brianna -Her name is Tiggy & we have a tolerant understanding of each other at this stage!
Debbie -an awed distance is a really good description of my approach to her!
Tara - Comfort it is. Not for me, but I do appreciate how my children adore her.
Deirdra -thanks so much for Award
Olive - I'm slowly getting over the "giving me the creeps" bit. I have had no choice.

I didn't used to like cats - these days I am a complete convert! Your Tiggy is beautiful. :-)

I do try to succumb to her charms. Eventually I will get there.

Aw, that's such a great story. Your cat is so cute. Of course she sleeps on your favorite chair :-) Cats are pretty clever!

Hi Melissa, thanks for dropping by.

She is clever and knows exactly how to play my misgivings!

I posted about cats too!

C is for Cat

Tiggy is a very pretty tuxedo, no?

Olive, my cat wags his tail like a strip-tease artist! And he comes when I call his name or snap my fingers. He's blind so maybe he never saw that he was a cat when he looked in the mirror?

Fellow A-to-Z'er here. I'm glad I caught your post; to check out my cat post if you have a chance.

Sidney, my friend Olive will be chuffed to hear your comment! Must check out tuxedo reference... I'm now following your blog.

Love cats and everything about their mentality. I often say I'm coming back as a cat.