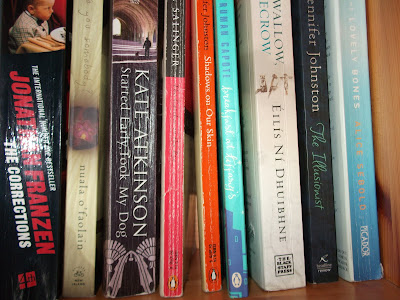 Often, I fall in love with sentences. Seductive, unforgetteable language presenting a sentiment that resonates.

I write it down.

In so doing, I nurse a hope that the beauty of the language might implant on my writing psyche and reappear, melded into my own creation, imbuing with flair, my own modest offerings.


Evocative: "I am always drawn back to places where I have lived, the houses and their neighbourhoods."
The opening lines of Truman Capote's Breakfast at Tiffany's


Insightful:
"The penalty for being loyally accepted for the whole of your life is that you must stay what you always were. A sardonic family eye rests on the member who tries any little acts or wiles."
Nuala O Faolain Almost There

"It wasn't that life was constantly unhappy but that a perpetual, shadowy uncertainty dawdled at the edge of every day."
John McKenna Things you should know

"He had never felt completely comfortable at these forced efforts of conviviality."
Alice Sebold The Lovely Bones

Tragicomic:
"I detest most of the members of my family. They are for the most part, thieves, misers, bullies and incompetents."
Stieg Larsson Girl with a Dragon Tatoo

"I find it hard to live without the sound of it, the smell of it, the clouds, night, day, grey, blue and I love the turbulence of storms."
Jennifer Johnston (writing about the sea) in This is not a novel

Image-filled:
"The smooth empty little island on which he had been happily perched had given a preliminary heave, and would presently reveal itself to be not dry land at all but the humped back of a whale."
Benjamin Black Christine Falls

Unexpectedly philosophical:
"Now he had been saved by the loyalty of a dog. The less innocent he was, the more innocent his saviours became. There was some kind of exchange at work in the universe that he didn't understand."
Kate Atkinson Started Early, took my dog

"Boy, when you're dead, they really fix you up. I hope to hell when I do die somebody has sense enough to just dump me in the river or something. Anything except sticking me in a goddamn cemetary. People coming and putting a bunch of flowers on your stomach on Sunday, and all that crap. Who wants flowers when you're dead? Nobody."
J.D. Salinger Catcher in the Rye

Oooh you have included some wonderful lines here (including your own.)

Amongst my favourites of those you posted is...
"It wasn't that life was constantly unhappy but that a perpetual, shadowy uncertainty dawdled at the edge of every day."

I agree with you that well put together words can be so seductive. I can't think of any personal favourites at present, I just enjoy them as I read and then they are gone. Perhaps I will start writing them down as you do, it sounds like a good idea. :-)

Hi Susannah
Ah, I love that you picked John McKenna's one...it's such an insightful description.
Thanks for dropping by.