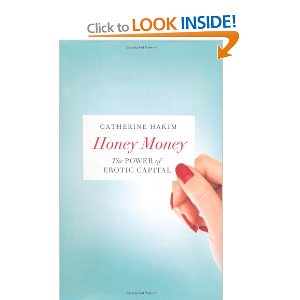 Since the book was released in the last few months, I've gorged on the delicious, divisive on-line debate generated by "Honey Money."- lurker that I am.

And while I swirl somewhere between:
(a) being horrified that the shallow premise of 'good looking is best' is being touted as a viable concept that should be taught to young girls -whah? (Hakim cites a well known "fashion model" who has exploited every cosmetic enhancement possible to make millions as being a fine example of good use of erotic capital)
and
(b) being horrified that such an obvious and well-worn concept (i.e. better looking people are more successful than ugly ones) is the subject of a widely reviewed book. How on earth did Hakim generate sixty thousand words on the subject? 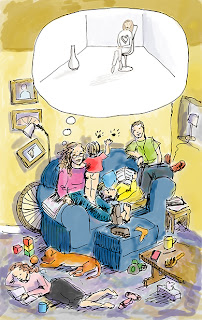 Great post!
Oh lordy, the title says it all -Honey money! I wondered too, how could anyone write more than a sentence on that subect!
Its such old hat, and hardly rocket science...

and playing up beauty/ sex appeal increasing earning power ? Am I missing something? Hardly how the guys got to earn more for the last couple of decades ...strutting their tushes up and down the offices? (Oh minister, you've a fine figure on you, go run this damn country!)

Hmm, wonder how the Magnificent Seven would score. Do you think we could cobble together a bestseller on Presidential capital? Seems being called Mary and wearing svelte suits scores well. Great post, Mari, and I share your horror/amazement. Debbie X

Niamh - I couldn't resist the subject. Like your image of the minister with the 'fine figure'
Debbie -I agree we could certainly do with some tips on Presidential capital!
Lola -thanks for visiting!

I am the first time on this site and am really enthusiastic about and so many good articles. I think it’s just very good.
[url=http://www.mulberryoutlet2012.co.uk] Mulberry handbags[/url]