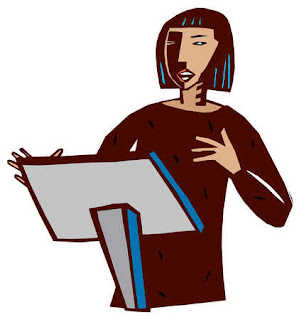 It's that time again - to step up to the microphone and voice those creations for an appreciative audience.

Hosted by my writing group, Clane Writers, in The Liffey Arms, Newbridge, the Open Mic saw seventeen readers take to the podium last night to give us a miscellany of poetry, short story, memoir, reflections and a couple of songs thrown in for good measure. 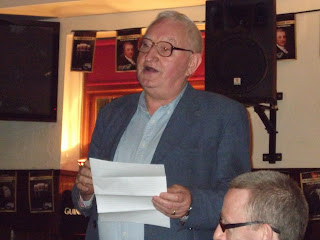 John Martin kicked off proceedings by assuring us his story wasn't autobiographical, and without the assistance of the mic, gave us Upstaged  a comic tale about a car crash, helpful bystanders and a BMW, narrated by a very perplexed car thief (who was not John, of course)
Liam Power  told us he was "descended from a squirrel" and "fessed up" to being a hoarder, in a piece on the hilarious consequences of not being able to declutter.
Debbie Thomas read Blue, a short story that weaved colours around us like a soft veil. "Green kissed red into apples" and "Red was busy painting the town." 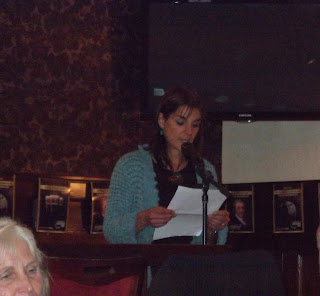 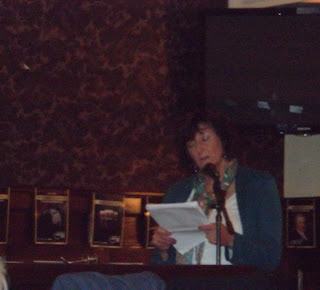 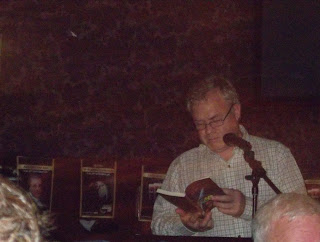 Martin Malone gave us The Date from his award nominated short story collection The Mango War - a hilarious portrait of the obstacle course that is blind dating. 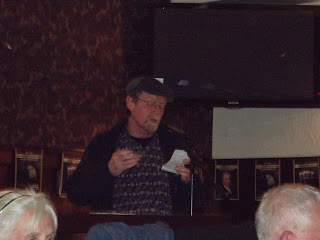 Paul McCormack, singer songwriter, and owner of no less than 2,000 of his own song compositions, gave us a break from the spoken word with two of his originals. The X-factor Blues reminded us of our obsession with THAT programme and also told us, accompanied by bluesy harmonica, that "Simon and Louis wouldn't know talent if it broke down their door." Banjo on me back  was an "eventful" tour around Germany in the seventies and eighties.
Una Ni Cheallaigh read Dream Child, Waiting Room and Joshua Tree from her recently published and very favourably reviewed poetry collection, Salamander Crossing.
Sylvia Hickey read us a travel piece from Perth.
Mervyn Ennis opened a personal reflection by declaring himself a "Luddite" before launching in a computer jargon charged, extremely humourous description of how being I.T. literate could really help your life. His hilarious image of "cutting and pasting"   appropriate clothing onto his teenage daughter stands out.
Sheila Briody read The Ghost, an evocative, image filled account of a visit to the misty Scottish Highlands.
Mari Gallagher (yours truly) read a piece of memoir My first visit to the Dentist. 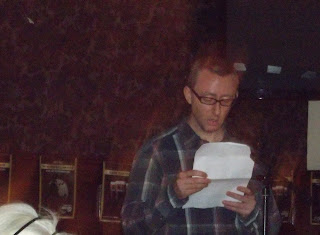 Peter Butler gave us some poetry. 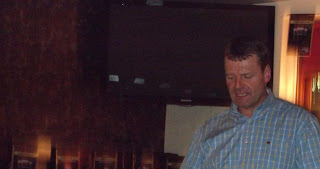 Brian Carroll read Gravity in the Glen a descriptive outline of an army mortar competition and a General's incendiary response to lapses in catering standards. "They left quieter than they arrived," summed up the goings on. 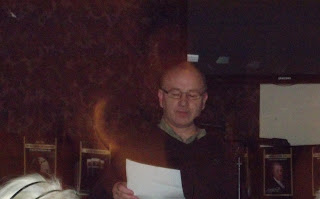 Paddy O Beirne gave us some poetry where "scraggy haired boys, tired and hungry" and "big bellied men in wellingtons" roamed the streets on fair day.
Rita Crampton, super M.C., read her short story, Farewell Angelina,   a haunting tale of teenhood memories and longing.
And in between the breaks, we chatted and exchanged writerly gossip. 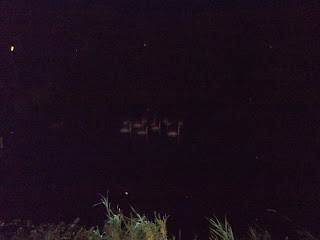 On the way home, the swans on the Liffey were having their own get together.
Posted by Mari G at 8:02 AM

Sounds like a great evening. Sorry I couldn't make it!

Hi Michael.
Pity you couldn't make it..... but there's always next time!

Yes indeed, packing for a trip to Australia.

Sounds like a wonderful night, I would have loved to be sat in the corner enjoying it all. :-)

Do you get nervous when you read aloud in front of people or are you a natural? ;-)

Thanks Eileen, the photo of the swans is a bit dark, maybe yours is better?

Susannah - always nervous but each time I do it, it gets a bit easier
Nice to hear from you!

Sounds like a great evening. When's the next one? I'll try to head south

Thanks Kate, it was fun.
No date yet for next one, will let you know.

A wonderful evening, Mari, thanks to your brilliant organisation and generosity. What a varied selection - I love the way it dotted about from car theft to X-factor, marital strains to hoarders' confessions. Sorry to miss your dental delights. Debbie

Hi Debbie. Thanks for kind words. T'was a great and varied night -the readings are what make it -apart from the one about toothache that is!