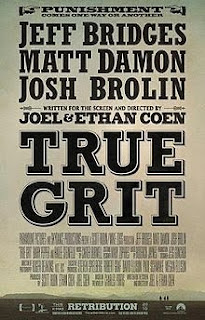 Mumbling, incoherent heroes with bad teeth who are just a whisker away from being criminals, exhausted horses plodding at a painfully slow pace, food that looks like it should be at the bottom of a compost bin, cowboys riding blithely along with bullets lodged in their arms or legs, 'True Grit' is (as described by the 'Guardian')a 'straight' western.

For those of us who prefer our movies (mostly) sanitary and violence free, the Coen brothers depiction of fourteen years old Mattie Ross'(Hailee Steinfeld)chase across Arkansas as she tries to bring her father's murderer to justice,was, at times, unsparing.

When an up and coming young Irish actor has his fingers suddenly hacked off at the knuckles, I ended up curled downwards in the seat, staring through my own (thankfully still intact) fingers and remained in that position for at least half an hour, while Mattie's travelling companions, Rooster Cogburn (Jeff Bridges)and Le Beouf (Matt Damon) shoot their way across the wilderness.

For all that, the satisfying and typically unsentimental Coen brothers' ending has 'True Grit' lingering in my mind, even though at times during my two hours in the cinema, it seemed like true grit was needed to actually keep my eyes on the screen.
Posted by Mari G at 5:50 AM

My sister went to see this at the cinema and said it was good but not a patch ob the original, a fact she and a couple of elderly ladies in the audience agreed heartily on, on the way out.

Good review though, you write them very well. :-)

Hi Susannah
A lot of the remakes are not a patch on the originals...
Thanks for kind words & for dropping by!
Mari