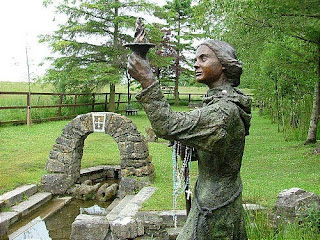 As part of the annual St Brigid's Festival, a special night of readings and music was held in the Derby House Hotel in Kildare Town, (Co Kildare, Ireland) on Saturday 5th February. The event was organised and hosted by Kildare based writer and "Living Word" broadcaster, Maria Murphy.
The theme for the night was 'Food and Famine', a subject that inspired all manner of varied readings from jumped up celebrity chefs to the conflict of cookbooks versus diet books, mayhem in a school cookery class, cave men gnawing on hunks of meaty bone, stolen grocery shopping trollies and of course, the famine and the still sore scars it has left on the Irish pscyhe. In between readings we were serenaded by wonderful traditional Irish music, played for us by talented musicians who also happen to be parents of children from the local Gaelscoil.

During the interval a visiting group called "Whispering Song" from Toronto, Canada, performed their energetic, powerful tunes for us, giving us a taste of something vibrant and very different. 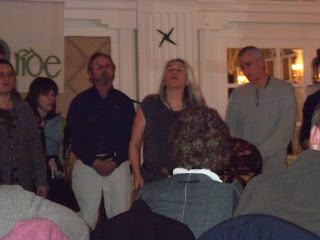 I was honoured to take part in this ambient event and read a piece of (food filled) flash fiction (is that an alliteration or what?) called "Heaven in a Cloud" which was published in a Leaf Anthology last year. 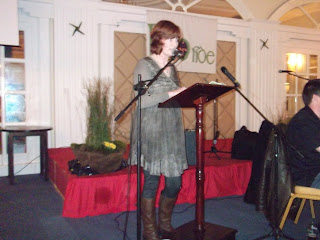 Hi Susannah.
It's all about the taking part, isn't it...
Thanks for dropping by!
Mari

If you're doing something again this year, let us North Kildare writers know!