Having noted its aeons-long presence on the bestseller list and its ubiquity in the prime position on every bookshelf in the country and resolutely determined not to follow the crowd and just buy it because everyone else has, (a la Fifty Shades of Grey) curiosity eventually wore me down. The first line helped too: "When I think of my wife, I always think of her head. The shape of it, to begin with." 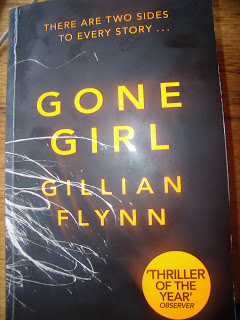 Gillian Flynn,  former Entertainment Weekly writer and critic and author of two previous novels, has not only created a bang up to date, financial crisis and all, study of the dissolution of a marriage in Gone Girl, she has also written a novel that while I was reading, I thought:
If I was ever to write a novel, this is the one I'd want it to be most like.
Not just because it's sold millions of copies worldwide and is now being made into a movie but because I could see, hear and smell  Flynn's characters, the detail was so apt and accurate.
Notwithstanding the dud ending that made me want to hurl Gone Girl against the wall, I remained glued and compelled until I got to its implausible, thrown together conclusion.
Gillian Flynn,

if you're reading this, I demand an ending re-write.
Before that ending, though, she mixes insights on the complexities of marriage into a tense thriller using an original, accessible writing style. Thrill-lit, maybe?
Lines I loved:
"We were the first human beings who would never see anything for the first time."
Nick Dunne, husband, on the impact of the internet.
"I'd fallen in love with Amy because I was the ultimate Nick with her. Loving her made me superhuman, it made me feel alive."
Nick Dunne's on his wife when they got married.
"She's a cool girl. Men always say that as the defining compliment, don't they? Being the Cool Girl means I am a hot, brilliant, funny woman who adores football, poker, dirty jokes, and burping, who plays video games, loves threesomes and anal sex, and jams hot dogs into her mouth."
Amy Elliott Dunne's version of her husband's impression of her when they got married.
"Can you imagine, finally showing your true self to our spouse, your soul mate, and having him not like you? That's how the hating first began."
Amy Elliott Dunne's diary entry on the day she disappeared.
"Most beautiful, good things are done by women people scorn."
Amy Elliott Dunne on the family 'menial' jobs done by women such as planning holidays and children's birthdays
If you're one of the millions who read Gone Girl, what did you think?
Posted by Mari G at 4:22 AM

Hi Mari, Could you send me your email address? I want to contact you. Contact me at : nuala AT nualanichonchuir DOT com
Thanks!
N x

Dress appropriately for success when heading to an interview.play bazaarBe sure to choose appropriate attire and remember to pay attention to hair and nails.satta king