J.K. Rowling's offering of adult fiction was an irresistible draw. 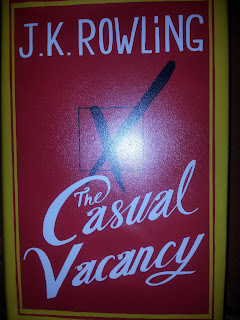 After the unmatcheable magic (oops) of the Harry Potter series, with its well rounded, believeable characters who grew darker and more mature as their readers grew up, (or just grew older in my case) I wondered whether J.K. could possibly write any sort of story  without resisting the temptation to inject a bit of surreality. 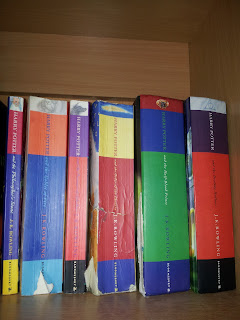 Such as Ron Weasley receiving a howler  from his mother when he drives his dad's car (without permission) through the sky to school. here
Or facing your demons by waving your wand and chanting riddikulus - your tormentor is suddenly dressed in a silly dress and floppy hat, thereby reducing their power to terrorise you. here
During a recent television interview, J.K. admitted that she wrote The Casual Vacancy  without the pressure of having to conform to any standard or genre, the success of Harry Potter having left her financially comfortable enough to experiment, and relaxed enough by her literary achievements not to get overly panicked if her adult writing flopped.
My thought as I ploughed through the first two hundred pages with its myriad of characters was, J.K., are you trying to emulate Angela's Ashes for misery lit?
Yet, I couldn't stop reading about Pagford with its snobbery, domestic violence, dysfunctional families, bullying, drug addiction, unhappy marriages and political rivalry. Despite, the roving point of view and lack of central character, The Casual Vacancy  works, simply by letting you feel as if you are a fly on the wall, looking into every character's mind and recognising someone you know in each and every one.
The Casual Vacancy is singularly without the magic of J.K. Rowling's children's writing but that doesn't stop it from being a surreal piece of realism.

I read the first page or two of it in Easons and found it absorbing so I'm looking forward to reading it. Interesting that she has no central character- only someone of her status could get away with it and still be published.

Hi Eileen. Yes, Cas Vacancy worked even without sticking to the 'usual' rules. But then JK doesn't have to worry about rules!

Hi Mari, I'd love to join you as a fly on the wall - have read good and bad reviews and yours captures elements of both. I love the way JK felt 'financially comfortable' - understatement of the century. 'Surreal realism' - what a tantalising idea that whets the appetite even more. Eileen's right - JK could have written a shopping list and we'd be queuing up. It's good to see her branching out, though - in its mild way, a courageous act. DX

Only smart job seekers will be successful.play bazaar This means learning all you can. Take what this article has taught you so that you can become employed somewhere that you like.satta king