Decorations stashed away in their usual, organised pile, awaiting next year, 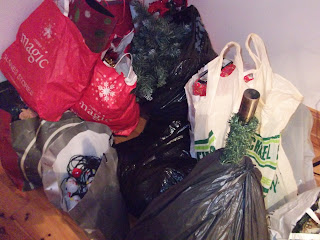 I opened my copy of the prairie schooner. 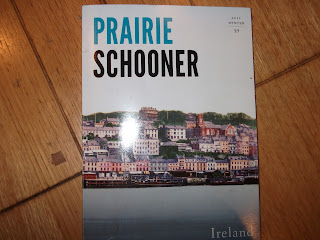 Thanks to a blog post on Nuala Ni Chonchuir's blog I discovered that even in far flung locations such as the University of Nebraska, U.S.A., Irish writers are sprinkling their talents. In his introduction to the Winter 2011 issue, Professor of English at Nebraska and author, Stephen C Behrendt says:
"Irish writing today involves a "specialness" that is both distinct and different from any other.'
Love of nature, loss, loneliness, childhood memories, the creative process, frustrated homemakers and the changes wrought by economic woes, feature.
Some standouts:
Michael Corrigan: A Tale of Workers
"we turned up every day doing the menial things
that make it work for everyone
as the clever classes played the credit lotto with the nation
then woke one morning to find our country gone."
Jean O'Brien: Moving on
"I have left my father's house.
In the evenings when dusk swallows the land
I feel the slow cooling of loss. Some days
I just long for my heart's home."
Richard O'Toole: The Woman who hated washing machines
(Full marks for great title)
"In the dead of night she would smash them to oblivion with a sledge hammer
All the while her family slept
And in the morning the clothes gleamed
Her husband loved her passionately
But thought she was a little hard on washing machines"
Ciaran O'Driscoll: Catch
"It is good for poets to take their notebooks
to bed with them, for musicians to sleep
within an arm's reach of their instruments"
My favourite was from (the uber-talented)
Nuala ni Chonchuir:  Peach
Told through the eyes of Dominic, a separated man "bent out of shape by loneliness," who strikes up a relationship with pregnant Maud, it grabs from the first sentence:
"A pregnant woman was getting drunk in the back lounge; I could see her through the hatch, from where I sat at the bar."
The turning point in the story which involves Maud's cat, is so perfectly written that I was in the room with them, watching the whole thing implode.

A nice way to round up Christmas.
Posted by Mari G at 1:33 PM

What a great selection, Mari. Bravo to the washing machine smasher - I'll be lending her a hammer tonight. Great post and Happy New Year. DX

Thanks for the taster, it looks like a great read:) The woman who hated washing machines is a brillaint title:)

Debbie - I think we all know how the washing machine smasher feels...

Niamh -I reckon Richard O'Toole knew how to get our attention with that title!